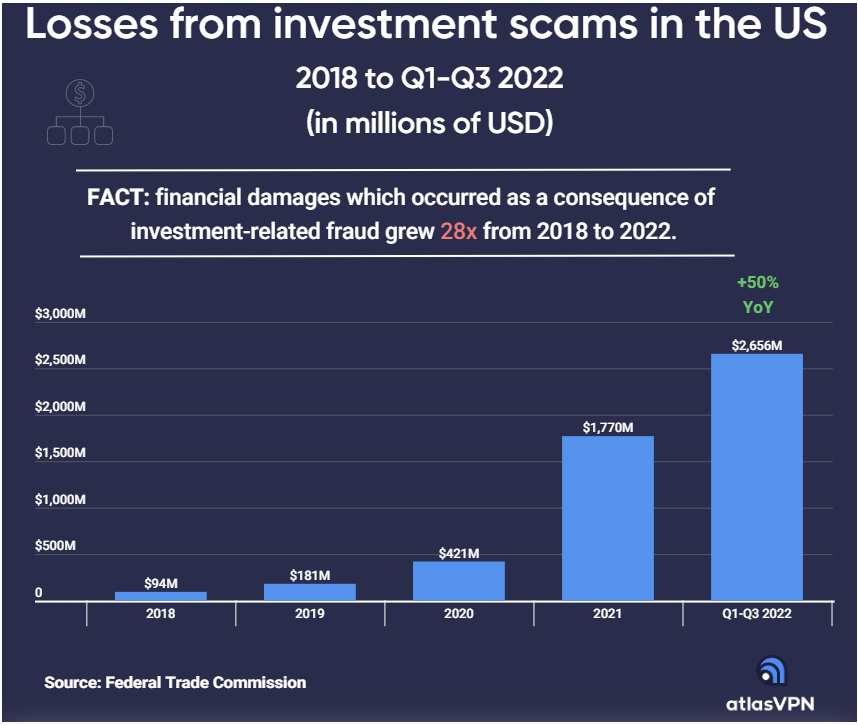 In the past few years, there has been a proliferation of one-of-a-kind investment opportunities due to the emergence of novel, potentially game-changing technologies such as non-fungible tokens (NFTs) and blockchain. Sadly, the majority of these corporations do not take the welfare of their investors in mind when making decisions.

Both the business world and the world wide web have undergone rapid evolution, outpacing the security mechanisms that were intended to safeguard consumers from being taken advantage of in transactions of this nature. According to the findings of a study conducted by Atlas VPN, the risk of fraud associated with business investments is the greatest.

According to the most recent statistics provided by the Federal Trade Commission, during the first three quarters of 2022, American residents lost a staggering total of $2.66 billion to various forms of investment scams. This marks a 50% increase from the previous year’s total loss of $1.77 billion in 2021.

The quantity of complaints that have been submitted to the FTC also makes it very evident how serious the issue is. The Federal Trade Commission received close to 80,000 reports of investment fraud during the first three quarters of the year 2022. Seventy-four percent of these reports pointed to a monetary loss. In comparison, less than 15,000 complaints were submitted to the FTC in 2018, and of those, 54% mentioned that they had suffered damages.

The use of cryptocurrencies and social media

When victims of investment fraud try to withdraw their funds in cryptocurrency form, they significantly increase their risk of having those funds stolen from them. Because cryptocurrencies are predicated on anonymity and decentralisation, it is difficult to keep track of them and get your money back.

To obscure their digital footprints and make it more difficult to track them down, threat actors may employ cryptocurrency tumblers. Because of this, it is really challenging to locate them. The blockchain’s privacy features are more beneficial to criminals than they are to victims.

According to the findings of the survey, the most common way that fraudsters make contact with potential victims is through the use of various social media platforms.

According to AtlasVPN, the overall damages that can be attributed to investment scams in the United States are likely to exceed $3.5 billion, with the median damage amounting to $6,000.